Hey there, keto pals–what are the negative effects of ketones? Are you damaging your body while you’re trying to save it?

Nope. It’s quite the opposite. Low-carb, high-fat eating plans like ketogenic diets are boosting health in a variety of situations.(1)

It’s a great question, though. You’ve probably heard of keto flu and diabetic ketoacidosis. While these things are real, that doesn’t necessarily mean that you’re in danger when you’re on a keto eating plan.

Finding the right answers to these questions is critical, especially if you’ve got certain diseases such as diabetes mellitus. However, there’s so much information available that it’s difficult to sift through all the data and come up with answers that make you feel comfortable.

We’ve created this article to give you simple, direct answers to this question: what are the negative effects of ketones? Let’s jump in and ease your mind! 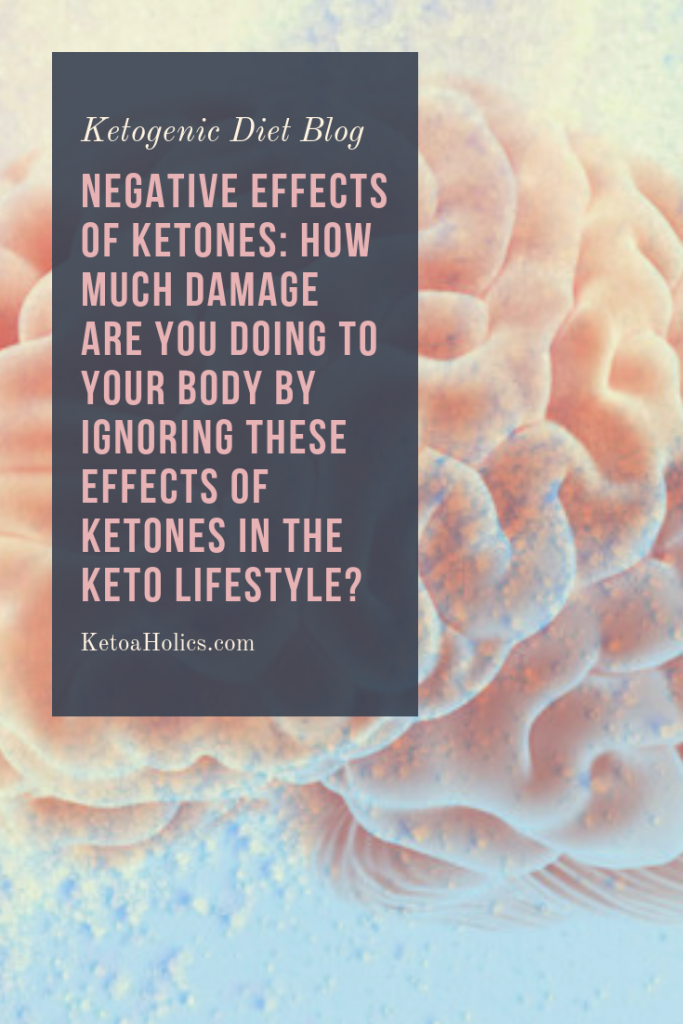 The Most Dangerous Situation The people most at risk for serious conditions with ketosis are those that have diabetes. Type 1 diabetes is also called childhood diabetes or juvenile diabetes because it often begins during childhood.(2)

1. What Are The Negative Effects of Ketones on Someone with Diabetes?

If you have type 2 diabetes, a ketogenic diet plan can help you regulate your blood sugar and other health issues. Ketones pose more of a risk for type 1 diabetes patients.

People with type 1 diabetes often have damage to tiny blood vessels near their eyes, damage to their nerves, and damage to their kidneys. Eye and nerve damage may not be impacted much by ketosis, but the kidneys can be.(3)

Occasionally someone with type 1 diabetes will get something called ketoacidosis, which is when too many ketone bodies build up in the blood. The blood turns acidic and can then be hard on your kidneys. You can go into a coma. Sometimes ketoacidosis is fatal.

2. Can Someone Who Doesn’t have Diabetes Mellitus Get Ketoacidosis?

You’re at a higher risk of getting ketoacidosis if you’re an alcoholic, if you’re starving, or if you have an overactive thyroid.

3. How are Patients with Ketoacidosis Treated to Get Ketone Levels Down to a Healthy Range?

In one study, non-diabetic children who had ketoacidosis were treated two different ways: with insulin and glucose injections, and with a bicarbonate infusion.(5)

Those who received the bicarbonate infusion experienced transient comas. The children who were given insulin and glucose recovered more quickly.

What are The Negative Effects of Ketones on the Kidneys of People Who Don’t Have Diabetes?

If you don’t have type 1 diabetes, you might still want to keep an eye on your kidney health during ketosis. There’s a chance you might get kidney stones.

You also might be losing water and electrolytes so quickly that your kidneys can’t keep up, and you could end up with low blood pressure.

Are There any Negative Effects of Ketones on The Brain?

Sometimes, when you first start a ketogenic diet, you might experience brain fog. This isn’t the fault of ketones, though. The impaired brain function happens because not enough energy is getting to your brain.

Blood sugar is lower because you’re eating differently, and your glycogen stores have been used up when you start feeling this way. Some people refer to this and to the tired, exhausted feeling that comes with it as the keto flu.

Keto flu can be thought of as detoxifying from carbs. Once they’re out of your system and your

body begins to seriously burn fat for fuel, your ketone levels will raise naturally. The ketones will fuel your muscles and your brain.

Many people report feeling wonderful once they get past keto flu.

Is There a way to Circumvent Getting The Keto Flu?

Some people starting ketosis never get keto flu. For those who do, supplementing their ketogenic diets with an MCT oil supplement gives them a kick of ketones that they can use for immediate energy. This clears the brain fog and helps them move through the day.

What Are The Negative Effects of Ketones When You’re Trying to Lose Weight?

If you’re watching your water intake and your electrolytes, ketones will bring you a boost of energy even while you’re dieting.

1. Plan Your Eating to Make the Most of Your Ketones

If you’re going to diet, you should choose your eating plan carefully. With a low-carb, high-fat eating plan, keto flu is likely the only risk you’ll face. You know how to get around that now.

The same is true for intermittent fasting. With intermittent fasting, your body can go into ketosis during the portion of the day when you’re not eating. You might occasionally feel weak and tired or get a little brain fog, but quality MCT oil can bring you right back up again.

2. Are there any negative effects of ketones during exercise?

No. It’s exactly the opposite.

When you’re exercising and you’re in ketosis, you need fuel. You can’t get it from blood sugar, so you get it from ketones. They’re a benefit to you rather than a risk.

As with dieting, if you get tired and weak while exercising, consider supplementing with an MCT oil to bring your ketone levels back up. Once this happens, you’ll have the energy and endurance you need to complete your workout.

Final Thoughts on Ketones and Their Negative Effects

Simply put, there aren’t many negative effects from ketones. They’re an efficient way to fuel your body. The diets that produce them are helping with Alzheimer’s disease, diabetes, and other serious illnesses. Eating a ketogenic diet might be the best decision you make.

So what are the negative effects of ketones? If you keep an eye on your electrolytes and water and if you supplement with MCT oils to avoid the keto flu, you probably won’t have any at all.